The image below is a copy of the 13th Station of the Cross at Saint John the Evangelist Parish, Lakemont, Altoona, Pennsylvania. 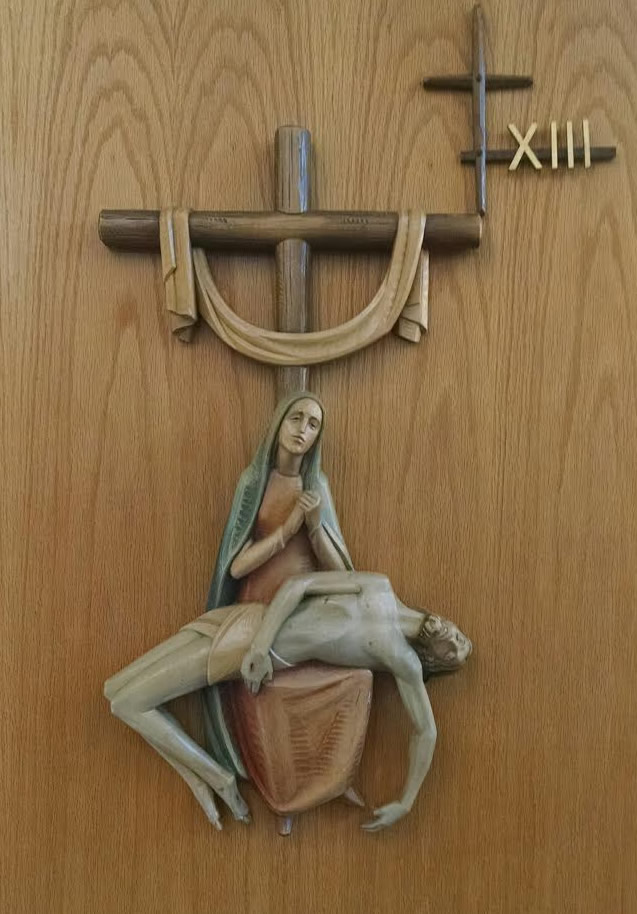 In contrast to Michelangelo's Pieta, in which Mary is looking at Jesus in her lap, this image shows Mary with her hands folded and her eyes lifted in prayer to the Heavenly Father.
If we ponder this image and allow its meaning to touch our heart, we may hear our Mother, Mary, in petition to our Heavenly Father saying:
"Heavenly Father, please don't let the sufferings of my Son be in vain for your children. For the sake of His sorrowful passion, help them to put complete trust in His Merciful Love and dedicate their lives to satisfying His great thirst for souls and for their love."
The first time I recognized the difference in this image, I wrote copy similar to what you just read. This was the beginning of what my pastor suggested could be a new book, in my words, for the Stations of the Cross as seen through the eyes of Mary.
After walking the Stations with Mary almost every day for about a year, I decided that is was time to write down what I was hearing our Blessed Mother saying to my heart as I approached each station. Although printing the Stations for groups of parishioners to use is under consideration, instead of waiting to have it put into book form, they are included in this web site.
Walking the Stations of the Cross with a cell phone is especially easy and should be spiritually rewarding.

Re: References to the words of Simeon in some of the Stations;
the passage from the Gospel of Luke 2:33-35 is included here for clarification.
"The child's father and mother were amazed at what was said about him: and Simeon blessed them and said to Mary his mother, 'Behold, this child is destined for the fall and rise of many in Israel, and to be a sign that will be contradicted (and you yourself a sword will pierce) so that the thoughts of many hearts may be revealed.'"
The reference to this sword of sorrow of Mary is mentioned a number of times.